Research shows dogs have a secret language at play

Research shows dogs have a secret language at play 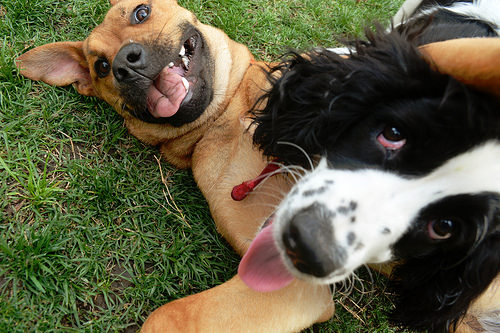 Nothing is more fun than watching dogs at play. Lucky Marc Bekoff spent decades researching playful dogs and says they send messages to each other with body movements.  We’ve all seen our own dogs do the most used, the play bow.  They use this pose to say, “I’m ready! let’s play!”

Dr. Bekoff, an ethologist,  has written quite a few books on animals, their love of play and their morality.  After studying an enormous amount of video footage, Dr. Bekoff found several interesting behaviors when dogs interact.   Once of these behaviors is “self-handicapping”, in which bigger dogs will realize their size advantage when playing with smaller dogs and will allow them to jump on them or even roll over to give the smaller dog a better chance.  Dr. Bekoff says this behavior suggests dogs adhere to a sort of morality. His research as well as that of others supports the idea that dogs play fair which scientists had believed was a uniquely human trait.

Other studies have shown that dogs understand a wide range of emotions like empathy and inequality, which probably does not come as a surprise to those of us with dogs in our lives.  Tests have revealed that dogs will lick or nuzzle others that are crying to show support. Some dogs will not perform certain trained movements like shaking hands for a treat in front of other dogs due to feeling privileged.

For more interesting reading pick up Dr. Bekoff’s new book, Canine Confidential:  An Insider Guide to the Best Lives for Dogs and Us.