READ THIS STORY IF YOU HAVE EVER KNOWN, HAD, OR LOVED A SPECIAL NEEDS DOG!  THE FITZIMMON’S AND THEIR DOG ROCKY ARE AN INSPIRATION. THIS IS PART ONE……ROCKY WILL CONTINUE TO EVOLVE AND SO WILL HIS STORY. 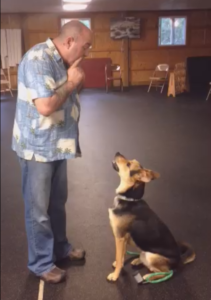 When my fiance and I rescued Rocky we had very little background information on him. Within a few days it was apparent that he had little to no socialization as a puppy and was likely abused. He was terrified of everyone and everything; if you went to pet his head he would flinch and crouch down as to prepare himself for a hit. Everything from a stranger coming into the house to an opening of a cabinet sent him running away with his tail tucked between his legs or barking rather aggressively at who ever he felt threatened by.

At this point all I could hear in the back of my head was my dad saying, “And this is why you never rescue a dog that is not a puppy. You just never know what problems they are going to come with.” He was right. We did not know Rocky’s history and could only piece together what made sense. I quickly became anxious myself and nervous that he might never be ok. I was not naive enough to pretend I didn’t know what happened to aggressive dogs.

I began to see this situation that we had with Rocky in terms of my profession. I am a teacher with a special education background. Just as students with special needs need more patience and love than their typical peers, I knew Rocky too was going to need just a little bit more love and patience than your average dog. Telling myself that we would not give up on him so easily got me to researching.

Researching led me in circles of varying approaches. My fiancé and I tried a little bit of everything but I still felt like we were slighting Rocky. If he stood a chance he was going to need someone with experience in handling dogs with anxiety driven aggression. This led us to Pete and Kindred Souls Dog Training Center. I read some reviews, browsed their website, and talked to my parents who took their rescued puppy there a year back. My parents told me, “Pete’s a real stickler but he knows what he is doing.”

I gave Pete a call and will be honest in saying that within 5 minutes into the conversation, I was on the verge of tears. My parents weren’t kidding, this guy is no joke I thought. Pete was very concerned and rightfully so because it is aggressive dogs that get put down the most due to people not taking the problems seriously or people simply throwing in the towel and giving up on the dogs. I explained to him that we were committed to helping Rocky be a better dog and would do whatever it took. We scheduled a one on one session with Pete the following week. Here, Pete saw first hand the issues we were having at home when Chris came to greet Rocky. Rocky was terrified of both men and began barking and growling at Chris. During this session, Pete stayed well beyond the allotted hour to give us strict guidelines to incorporate as soon as we got home. He also invited us to come in as much as possible (free of charge) to sit in on Basic Obedience classes with Rocky. Doing this would serve to socialize Rocky a bit more and get him acclimated to the environment in hopes that he would soon join his own Basic Obedience class. During these classes, Pete and Chris would sporadically give Rocky treats to show him that strangers are ok and do not always have to been seen as a threat. During our first few sit-ins I wasn’t sure if Rocky would ever make it into class; he would just not stop barking. Pete handled Rocky each time with such love and patience; Rocky even began to trust Pete himself and even looked forward to seeing him. After about a month and a half of being a spectator, Pete finally gave Rocky the go ahead to join class! We were thrilled!

It was time for Rocky’s first class in Basic Obedience. Let’s just say that us dog parents were both EXTREMELY nervous. As he started off his spectator days, Rocky was barking quite a bit during class. It was concluded that being front and center in the middle of a bunch of dogs and the action was a bit too intense for him. To top it off, the dog that was terrified of Pete, was now jealous of other dogs getting his attention! Pete had us move to the corner of the room where Rocky could still be a part of class but wasn’t so much in the center of it all. I felt a bit embarrassed and discouraged by this because I thought Rocky was ready for it all. Pete could sense my disappointment and reassured us that we needed to take baby steps with Rocky; he was not going to be miraculously cured over night. He also reminded us and pointed out to others in class how much improvement Rocky has already made so far and to focus in on that rather than trying to rush the process. We began to embrace our newfound location and were adamant about completing the homework each week. I am a teacher after all. By week three, Rocky was no longer barking at all during class, could stay “down” the whole duration, and performed flawlessly.

Week five was when we noticed the most change in Rocky.  This was just as Pete had predicted only a few short weeks back when I was the one walking away with my tail between my legs. During this class, Rocky was the dog Pete used a couple of times to demonstrate exercises on. That dog who growled, barked, and wanted nothing to do with strangers (men in particular), was now licking Pete’s face all over!!! We couldn’t believe it. Out of all the well behaved dogs in that room, it was Rocky being the teacher’s pet…go figure. Pete returned Rocky to us with tears in his eyes.